You are here: Home / social media / twitter / #TwitterTuesday / Do you think Twitter is just for young people?

Today’s #TwitterTuesday post is a mix of inspiration, and maybe even some fun.  It’s just 6 days till the Iowa Caucus, and the candidates are all over Twitter.  There are even articles the day after a debate showing the person who won as the person who gained the most Twitter followers.   It’s a rare event if the local or national news doesn’t quote some Tweets as they are talking about the candidates.  Today, I urge you, to step back from your personal feelings about the candidates, and just go to Twitter and read the Twitter feed of some of the candidates.    To research for this article, I
went to the three leading candidates in Iowa – Donald Trump, Hillary Clinton and Bernie Sanders.

Important to note here — I am not campaigning and I don’t know if any of these candidates will get my vote.    However, these people have the best political and marketing minds in the world working for them, so watching their Twitter feeds is something I can learn from.

If you’re not familiar with Twitter — here’s how to do this.

Here’s four of my favorites (in no particular order).   Once again — these are tweets to learn from, they do not represent my personal feelings about the candidates.

This one is pretty much genius.  Pella is a small city of 10k and Pella Windows is obviously one of the main employers.     The tweet references Trump enterprises buying Pella windows. 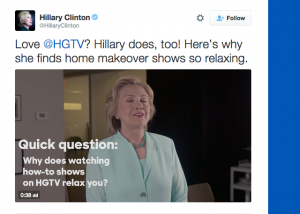 Who do you think this is targeted towards?    It’s not about policy, it’s not about attacking someone else, it’s about helping women relate to Hillary.    If you’re someone that loves watching home makeover shows, would this help you rellate to Hillary?

My last two examples both have to do with TV commercials.   If you’re not from an early caucus state, you probably don’t realize how many political commercials are made for the presidential election.    It’s a lot, and we all get tired of them.     I see that candidates are also posting their commercials on YouTube so they reach the digital generation — but here are two more tweets. 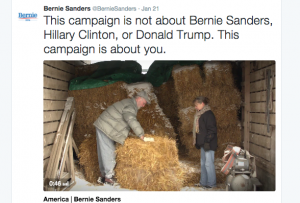 This is a tweet from Bernie Sanders.     It’s one of my favorite commercials, not because of the candidate, but because it shows farmers working on a dairy farm, and that’s something I can relate to.     However, it hasn’t convinced me that Bernie Sanders knows how to milk a cow!

Just one more from the “Donald”.   As I mentioned above, we’re tired of commercials in Iowa.    So here’s the “Donald”, trying to connect with Iowans on that!

For today’s Twitter Tuesday assignment, I urge you to go to Twitter, and scan thru some tweets of each Presidential candidate.    You’ll see all kinds of tweets, and it may inspire you on how you can connect with people through Twitter.    If you’d like help from Farm Girl Marketing Solutions on how to set up your Twitter strategy — schedule your free consultation with us today!

Previous Post: « Social Media & Farm Girl Will Change Your Pilates Studio!
Next Post: Pretend You Are a Boy Scout & Be Prepared! »