Now, as much as I would like the world to revolve around me, it really doesn’t.  You shouldn’t change your Twitter posting habit just for me.    You should go to Analytics.Twitter.com, click on the “tweets” tab, and check some of your posts.    Are people clicking on those links?   If they’re not, read on…… 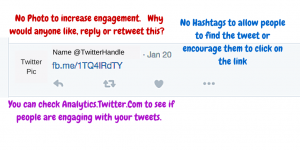 What’s not-Twitter-like about this tweet?  This post does not give you a topic.    There’s two issues with that.   People who are pressed for time (isn’t everyone) — likely won’t click on a tweet when they don’t know what it’s about — AND people who might be interested in this topic of this tweet who don’t follow you — won’t have any way of finding it because it doesn’t have any hashtags.

How can you make it better?   Simply adding three hashtags would work.   You might add these on FaceBook as well, but you need to consider your audience when you do that.   Do the people who are your FaceBook audience understand hashtags?    Would they engage with them or think you were just short on time and forgot to write an entire sentence?

One more step to take that Tweet to the next level.    Incorporate your topics (with their hashtags) into 140 characters that encourage people to click on your link.

Does this mean that Twitter takes too much time and you shouldn’t do it?   Absolutely not.   Twitter can be a tool to drive traffic to your website, bring clients to your door, and establish your business on social media and internet search engines.   Apply the Golden Rule.   If you treat Twitter like it’s a chore, and do it the easiest way possible like connecting to your Facebook account, you probably won’t get a lot of engagement or results from your Tweets.     If you learn to love Twitter by working with someone like Farm Girl Marketing Solutions, your feelings will show in your tweets.    You’ll engage people who are interested in the same topics you are, and your tweets will have more results!