You are here: Home / Tips for Pilates Studios / What in the World is a Hotwash? 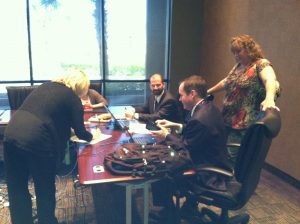 At a hotwash sit at a conference table, and decide what went well, and what to fix!

I first learned about hotwashes when we producing virtual training sessions.  We needed to know what worked and what didn’t, so we asked everyone involved with the production (from faculty, to moderator, to production staff) to give us 2 good things about the production, and two things we could improve on.    We tracked those things that we wanted to fix, and because of that, nearly everyone who worked in our organization, saw us progress from a putt-putt used car to a luxury car!

So on the first Saturday in May, after spending 5 hours at the Pilates studio to celebrate Pilates Day 2016 with Rivercity Pilates, I sat in my living room making notes about what I did, and what I would change for 2017.    Carey and our caterer (Kelly of Your Everyday Helper) also came over, and we went thru our lists together.    Important to note:   We did this the same day, while we could still feel the pain of our mistakes.     Sometimes events are like childbirth – you forget the pain because the outcome is so beautiful!    It’s also a fact that Pilates Day and Kentucky Derby day fall on the same day, so we were able to sample a Mint Julep and a cucumber sandwich while we talked about Pilates Day 2016.

Our list of positives far outweighed the negatives, but I want to share a couple of the negatives to give you an idea of what we identified during our Pilates Day 2016 Hotwash. 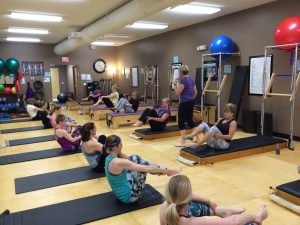 There was more — but I’m sure you get the idea.     What is important is that you have a hotwash after any event so that you can identify the positives and the negatives.   Hopefully, the negatives will be a smaller list for every subsequent event.   Hotwashes don’t have to “just” be done after tragedies like Hurricane Katrina.   The more we plan for each single event, the more benefit we can get from a hotwash, and that translates into more dollars for your business!