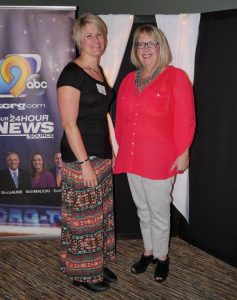 Carey and me when her business was named an A-list award winner for our local TV area.

When I started Pilates at Rivercity Pilates with Carey Sadler in 2014, she was trying to join the Twitter-verse. She had decided that she just didn’t get it (although she did have a personal Twitter account and a business twitter account).   However, she knew she should be “on Twitter” for her business.   Then she made an assumption.  She assumed that young people would know how to give her business a presence on Twitter.   So she hired some college age students to work the front desk, and one of their assignments was making sure that the business had a presence on Twitter.    They tweeted things about Pilates, but followers didn’t flock to Rivercity Pilates and Carey stayed pretty disconnected from it.

I would go to my private sessions, and I would talk about things I had found on Twitter — and Carey got curious.  She started asking me lots of questions and trying things on her personal twitter account.    She learned about Hashtags and Tagging, she started following local businesses, she started following other Pilates studios and instructors, and started to experiment.     When she couldn’t figure something out or was trying to figure out the “Twitter language” she would ask me and I gave her tips to make learning Twitter easier. Sometimes we would practice tweet something together so she could see how it was done.

She soon discovered that being limited to 140 characters was a good thing — because she could make time for 140 characters.    She could scan tweets and see interesting tidbits about Pilates, or hints for improving her business’ social media presence if she had a few minutes.   She found that Twitter was something that was easy to check while she was waiting to pick up her children from school or from an activity.   All she needed was her phone, and a few minutes, and she could check her Twitter feed, or search for something she was curious about.

As soon as she discovered that Twitter was another way to “connect” with clients, potential clients and even the Pilates community as a whole- she was hooked.    She loves creating creative hashtags, and helping her instructors and staff become more proficient on Twitter.

I believe one of the things she’s learned is that the effectiveness of Twitter is about connecting with people and it’s hard to connect with others if you are having someone who doesn’t know you or your business that well just randomly post tweets for you. Having a twenty something tweet for you is difficult, because they don’t have the knowledge of your life or your business, that allows them to sound like you, and it’s just not authentic or interesting to others.  People want to get to know you to see if your business is a fit for them.  If your Pilates studio doesn’t seem like it has a personal touch from it’s social media, then your potential customers are likely to find another studio that does offer that personal touch.

Carey’s Twitter story is why I started the virtual training classes on my website.  I’ve seen how helpful a little introduction to Twitter can be in helping a small business owner figure out how to use Twitter as a tool in their business. 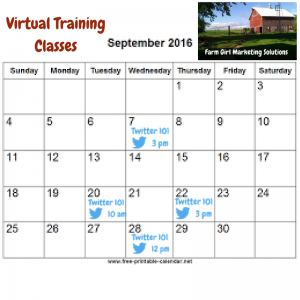 You can come to class for an hour, and we’ll go thru Twitter 101.    Before the class, I’ll help you get your account set up, so we can do some practice tweeting during the class, and after the class I’ll send you cliff notes of what we learned, along with some exercises you can try for your business!    It’ll be fun! Just one hour of your time, and we’ll get you started using Twitter to promote your Pilates classes/Pilates studio!  There are several dates and times in September already set up, and space if limited so you will get personal attention!    The class fee includes email support for your Twitter questions after the class!    Sign up here!