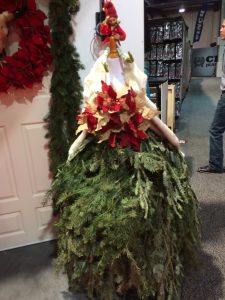 Who would’ve thought of making a mannequin skirt out of evergreen? Only at Cowboy Christmas!

Day 1 of the 2016 is in the books – and it was an amazing day that went by really fast!   As I said before, we brought a friend with us who has never been to Las Vegas.   Seeing all the NFR Hoopla through his eyes has been amazing and fun.    After we got here Wednesday evening, we spent some time getting acquainted with our hotel.   We’re staying in the Monte Carlo for the first time, and I have to admit — we really like it!   Part of the hotel is under renovation (and will become a new hotel I think) – but being in a hotel where it’s small enough to find people is fun!   The BareBack riders are here, so there’s a lot of “cowboy spotting”, and maybe most importantly (the bed is comfortable).    The pillows could use a little upgrade, but that’s partially a personal preference thing!
We left for Cowboy Christmas about 9 (took the rental car) and we were able to find a place to park (for $10).    There were already a LOT of people there when we walked in.    Since we had a friend with us, we walked the main hallway from front to back, and then we did almost the same thing upstairs at the RMEF show.    We didn’t see near as much as we wanted to see – so we will be going back.   The organizers of Cowboy Christmas reached out and sent me a canvas Cowboy Christmas bag after my first blog – and it was pretty handy. 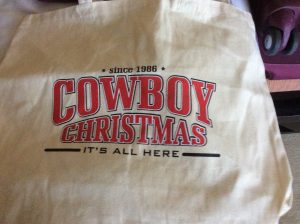 When we were in the back of the show (near the stage), a couple of people asked me where I got the bag — and I had to say it was a gift!    As we were leaving, I saw a sign on a counter in the lobby (near the Starbucks before you go into Cowboy Christmas) that said shopping bags, $5!   So my advice is to pick one up!   They are light weight, expandable, and they have a handle long enough to sling over your shoulder!   As a bonus — the guys that were with me could carry them without losing their “Guy Card” — which means they are not too girlie for a man to carry for you!

We came back to the hotel around 1:30 because we wanted to get back to the hotel before the NASCAR drivers took over the Las Vegas Strip for their victory lap.   I heard on TV that they close the strip only 3 times a year — on New Year’s eve, for the marathon, and during NASCAR Champion’s week.   We did some relaxing, before heading over on the 1st bus to the NFR!

The fan zone seems to have more things to do than ever, and I saw some kid friendly activities out there.   We went on in the building, where it appeared that they had opened the doors before the food/beverage vendors were ready!   People were hustling around trying to get the money in their cash registers, and there were probably already a thousand people inside.    I’m guessing that will be a bit more structured tonight.    The rodeo – was AMAZING!   Action packed, great entertainment, and it was over way too fast.   I would have to say that I couldn’t hear the announcers the way I wanted to, I don’t know if that was the way the sound bounced around the arena, or a product of where we were sitting.   Since our friend was with us, I sat with other friends.   We were on the top row of the Plaza at the roping end, and although I hadn’t met the people I sat by before – it was still terrific.   I sat between a rancher from Wyoming and one of JD Struxness’s best friends, and I learned some things about rodeo.  With those two beside me, I had great commentary even if I couldn’t hear the announcers very well.    Here’s my best advice!   TALK to the people at the NFR (whether it’s the rodeo or Cowboy Christmas, or in your seats at the rodeo, or in a food venue) — you never know who you’ll meet and what you’ll learn!!!

Have you noticed something missing?   Me too!   We never took time to eat yesterday!  We took the Mirage bus after the rodeo, and went to eat at the California Pizza Kitchen.  It’s a great place to watch the crowd, spot some cowboys and listen to live music!  We walked most of the way back to the Monte Carlo after our pizza — going thru casinos on the way.   Thus we saw Caesars, and Bellagio (check out the Conservatory in the Bellagio to see the giant tree) and then we rode the tram back to the Aria station, where we were able to walk inside back to the Monte Carlo!