You are here: Home / social media / An Orientation to Twitter Hashtags for Pilates Studio Owners

If you don’t understand Twitter hashtags, you are not alone.   I can’t begin to explain them in a single blog, so I’m going to give you some examples and information, and then we’ll go from there.  Here’s the wikipedia definition.

If you’re like me when I was a twitter-newbie — that doesn’t help much.   How do I know what hashtag to use?  What the heck is metadata or microblogging?   Here’s the hashtag scoop — in plain farm girl talk.  A hashtag is much the same as the name you write on a file folder that you put in your file drawer.   You don’t ask anyone else how to organize — you need to write the name on that folder so you can find it. In Twitter, you pretend that someone else is looking for that item in your file drawer — what would you name the file folder that you put that item in?    That’s your hashtag.

Why are hashtags important?   Because according to Internet Live stats, there are about 6000 tweets per second (on average), which makes about 350,000 per minute!   If you check the link above, you can actually see how many tweets have been tweeted today! Enough about numbers.   With 6000 tweets per second happening in twitter, if you want people to see your tweet you have to catalog it with a hashtag so people can find it.   For example, a common hashtag in the Pilates world is #Pilates.   No matter what you say in your tweet, anyone searching Twitter could find your tweet if “#Pilates” was included in your 140 characters. 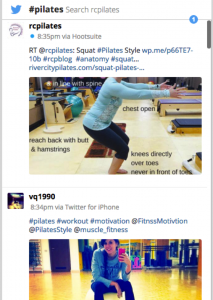 Now for real life!  Rivercity Pilates is a client of Farm Girl Marketing.  To look for content for them, I follow two hashtags (#Pilates, and #Inspiration).   When I say I follow the hashtags, I either search Twitter for them, or I search using a Twitter help app, such as HootSuite or TweetDeck.    But that’s a subject for another blog!  If you have any comments or questions, be sure an enter them below.   There’s little tiny print with a link to leave a comment below!

Previous Post: « Engagement does not always mean getting married!
Next Post: Social Media isn’t as easy as it looks! »